Ingestible "bacteria On A Chip" Could Help Diagnose Disease 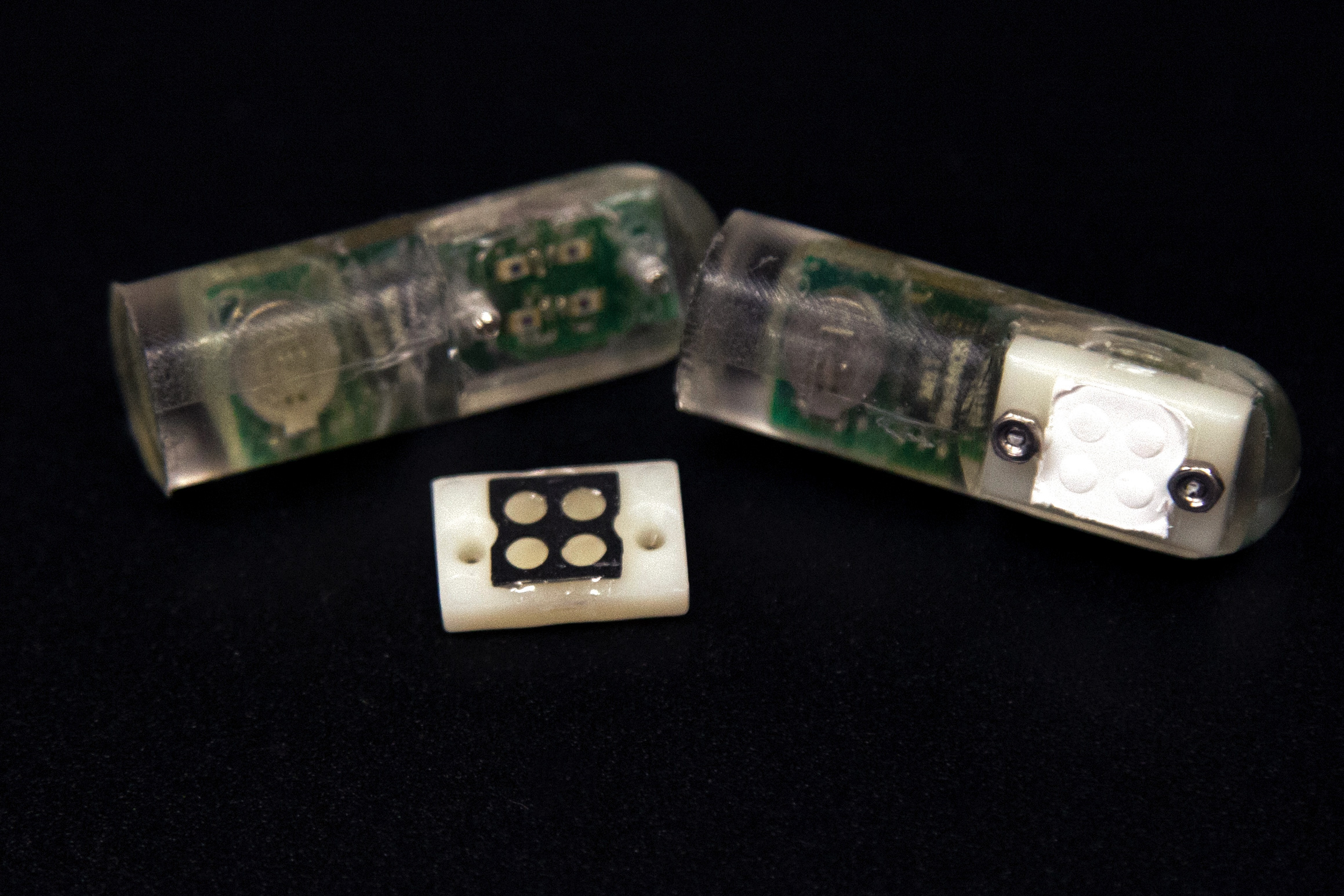 MIT researchers have built an ingestible sensor equipped with genetically engineered bacteria that can diagnose bleeding in the stomach or other gastrointestinal problems.

This "bacteria-on-a-chip" approach combines sensors made from living cells with ultra-low-power electronics that convert the bacterial response into a wireless signal that can be read by a smartphone.

"By combining engineered biological sensors together with low-power wireless electronics, we can detect biological signals in the body and in near real-time, enabling new diagnostic capabilities for human health applications," says Timothy Lu, an MIT associate professor of electrical engineering and computer science and of biological engineering.

In the new study, appearing in the May 24 online edition of Science, the researchers created sensors that respond to heme, a component of blood, and showed that they work in pigs. They also designed sensors that can respond to a molecule that is a marker of inflammation.

Lu and Anantha Chandrakasan, dean of MIT's School of Engineering and the Vannevar Bush Professor of Electrical Engineering and Computer Science, are the senior authors of the study. The lead authors are graduate student Mark Mimee and former MIT postdoc Phillip Nadeau.

In the past decade, synthetic biologists have made great strides in engineering bacteria to respond to stimuli such as environmental pollutants or markers of disease. These bacteria can be designed to produce outputs such as light when they detect the target stimulus, but specialized lab equipment is usually required to measure this response.

To make these bacteria more useful for real-world applications, the MIT team decided to combine them with an electronic chip that could translate the bacterial response into a wireless signal.

"Our idea was to package bacterial cells inside a device," Nadeau says. "The cells would be trapped and go along for the ride as the device passes through the stomach."

For their initial demonstration, the researchers focused on bleeding in the GI tract. They engineered a probiotic strain of E. coli to express a genetic circuit that causes the bacteria to emit light when they encounter heme.

They placed the bacteria into four wells on their custom-designed sensor, covered by a semipermeable membrane that allows small molecules from the surrounding environment to diffuse through. Underneath each well is a phototransistor that can measure the amount of light produced by the bacterial cells and relay the information to a microprocessor that sends a wireless signal to a nearby computer or smartphone. The researchers also built an Android app that can be used to analyze the data.

The sensor, which is a cylinder about 1.5 inches long, requires about 13 microwatts of power. The researchers equipped the sensor with a 2.7-volt battery, which they estimate could power the device for about 1.5 months of continuous use. They say it could also be powered by a voltaic cell sustained by acidic fluids in the stomach, using technology that Nadeau and Chandrakasan have previously developed.

"The focus of this work is on system design and integration to combine the power of bacterial sensing with ultra-low-power circuits to realize important health sensing applications," Chandrakasan says.

The researchers tested the ingestible sensor in pigs and showed that it could correctly determine whether any blood was present in the stomach. They anticipate that this type of sensor could be either deployed for one-time use or designed to remain the digestive tract for several days or weeks, sending continuous signals.

Currently, if patients are suspected to be bleeding from a gastric ulcer, they have to undergo an endoscopy to diagnose the problem, which often requires the patient to be sedated.

"The goal with this sensor is that you would be able to circumvent an unnecessary procedure by just ingesting the capsule, and within a relatively short period of time you would know whether or not there was a bleeding event," Mimee says.

To help move the technology toward patient use, the researchers plan to reduce the size of the sensor and to study how long the bacteria cells can survive in the digestive tract. They also hope to develop sensors for gastrointestinal conditions other than bleeding.

In the Science paper, the researchers adapted previously described sensors for two other molecules, which they have not yet tested in animals. One of the sensors detects a sulfur-containing ion called thiosulfate, which is linked to inflammation and could be used to monitor patients with Crohn's disease or other inflammatory conditions. The other detects a bacterial signaling molecule called AHL, which can serve as a marker for gastrointestinal infections because different types of bacteria produce slightly different versions of the molecule.

The researchers say the sensors could also be designed to carry multiple strains of bacteria, allowing them to diagnose a variety of conditions.

"Right now, we have four detection sites, but if you could extend it to 16 or 256, then you could have multiple different types of cells and be able to read them all out in parallel, enabling more high-throughput screening," Nadeau says.

The research was funded by Texas Instruments, the Hong Kong Innovation and Technology Fund, the Office of Naval Research, the National Science Foundation, the Center for Microbiome Informatics and Therapeutics, Brigham and Women's Hospital, a Qualcomm Innovation Fellowship, and the Natural Sciences and Engineering Council of Canada. Chip fabrication was provided by the TSMC University Shuttle Program.