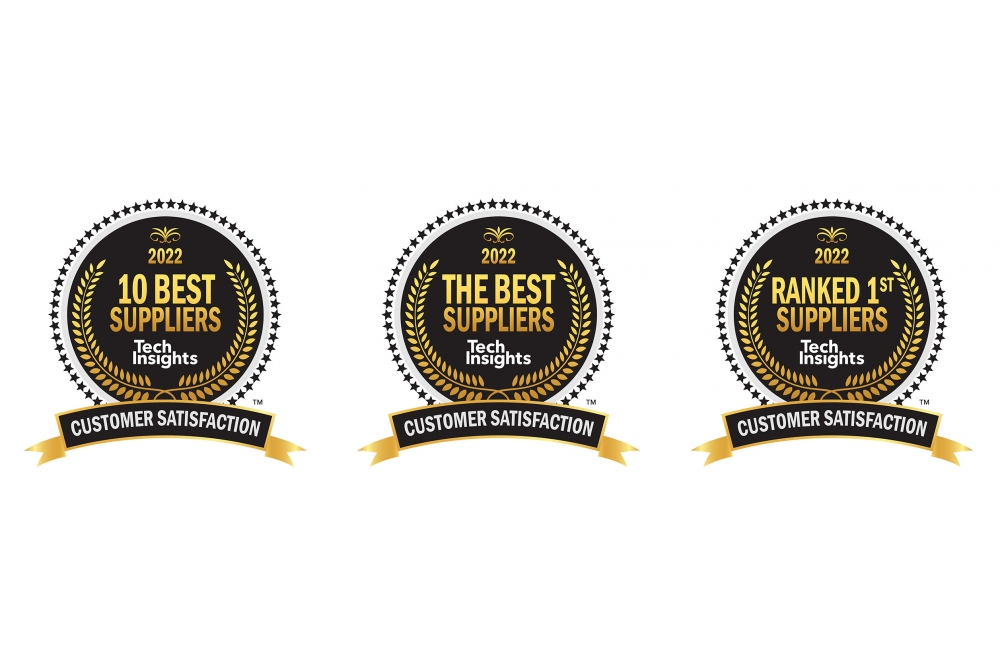 EV Group (EVG), a supplier of wafer bonding and lithography equipment for the MEMS, nanotechnology and semiconductor markets, has announced that it has once again been voted by customers as one of the 10 BEST Focused Suppliers of Chip Making Equipment and one of the 2022 THE BEST Suppliers of Fab Equipment in the 2022 TechInsights Customer Satisfaction Survey (formerly known as the VLSIresearch Customer Satisfaction Survey), increasing its score in both award segments compared to last year's listings as well as earning a 5 Star rating for the first time in both segments. EVG also received a RANKED 1st in Specialty Fab Equipment award again this year, marking the 10th year in a row that it has received all three customer satisfaction awards.

In addition, for the sixth year in a row, EVG was recognized as one of THE BEST Suppliers of Fab Equipment to Specialty Chip Makers—increasing its score in this award category while achieving a 5 Star rating for the second time in a row.

According to TechInsights, EVG earned its highest 10 BEST rating ever this year, with customers rating the company best at partnering, trust in supplier, recommended supplier and technical leadership. 2022 marks the 20th consecutive year that EVG has been listed among THE BEST Suppliers of Fab Equipment, as well as the 10th year EVG has achieved the number one spot as the highest ranked wafer bonder supplier.

“Once again, EV Group outperformed most of its peers, earning its first 5 Star rating for 10 BEST Focused Chip Making Equipment Suppliers for the first time while increasing its ratings in nearly every category and improving its overall rating for the fifth consecutive year,” stated G. Dan Hutcheson, vice chair of TechInsights. “EVG's strong focus on process knowledge is key to developing its core capabilities of wafer bonding, lithography, and metrology. At the same time, the company's Triple-i philosophy of “invent-innovate-implement” guides EVG's enthusiasm for technology, innovative strength, and internationality, which in turn helps enable its customers to successfully commercialize their new product ideas.”

“Customer satisfaction is at the core of our business philosophy,” stated Hermann Waltl, executive sales and customer support director at EV Group. “During the past year, EVG has continued to make significant investments, not only in our technology but also in our employees and services, in order to bring the best possible solutions and support to our customers. For example, our recently opened state-of-the-art customer training facility, the EVG Academy, has continued to expand its offerings for both EVG employees and customers, including technical training, general introductory courses, language training and soft skills development. In just one year, more than 100 technical training courses have been held, with more than 1300 certificates issued. In addition, with the lifting of COVID-19 travel restrictions, EVG has experienced all-time-high demand for our product demonstrations and process development services at our NILPhotonics® Competence Center and Heterogeneous Integration Competence Center™, which serve as innovation incubators to shorten development cycles and time to market on new products and applications driven by advances in nanoimprint lithography, and system integration/packaging, respectively.”

EVG offers a complete portfolio of wafer-level manufacturing solutions for a wide variety of micro- and nanotechnology applications and products, addressing established as well as emerging markets. The company's field-proven equipment, combined with EVG's superior process expertise and development support, enable its global customer base to stay one step ahead of the competition.