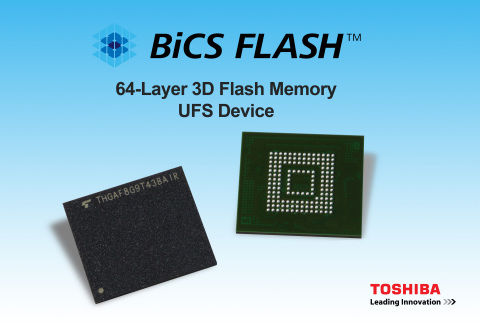 The new lineup will be available in four capacities: 32
gigabyte (GB), 64GB, 128GB, and 256GB[3]. All of the devices integrate flash
memory and a controller in a single, JEDEC-standard 11.5x13mm package. The
controller performs error correction, wear leveling, logical-to-physical
address translation, and bad-block management "“ allowing users to simplify
system development.

All four devices are compliant with JEDEC UFS Ver. 2.1, including
HS-GEAR3, which has a theoretical interface speed of up to 5.8Gbps per lane (x2
lanes=11.6Gbps) while also suppressing any increase in power consumption.
Sequential read and write performance[4] of the 64GB device are 900MB/sec and
180MB/sec, while the random read and write performance are approximately 200
percent and 185 percent better, respectively, than those of previous generation
devices[5]. Due to its serial interface, UFS supports full duplexing, which
enables both concurrent reading and writing between the host processor and UFS
device.

Toshiba was the first company in the world[6] to announce 3D
flash memory technology, and the addition of 3D-based UFS keeps the company at
the forefront of innovation while simultaneously enhancing its existing lineup
of BiCS FLASH solutions.

[1] Universal Flash Storage (UFS) is a product category for a class of embedded memory products built to the JEDEC UFS standard specification.

[2] Sample shipments of the 64GB device will start today with the rest of the line-up to gradually follow after December.

[3] Product density is identified based on the density of memory chip(s) within the Product, not the amount of memory capacity available for data storage by the end user. Consumer-usable capacity will be less due to overhead data areas, formatting, bad blocks, and other constraints, and may also vary based on the host device and application. For details, please refer to applicable product specifications.