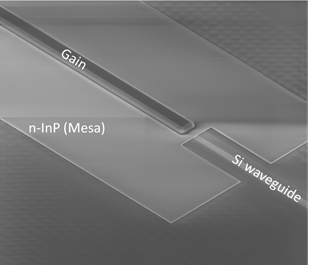 Leti, a research institute of CEA Tech, has integrated
hybrid III-V silicon lasers on 200mm wafers using standard CMOS process flow.
This breakthrough shows the way to transitioning away from 100mm wafers and a
process based on bulk III-V technology that requires contacts with noble metals
and lift-off based patterning.

The project, carried out in the framework of the IRT
Nanoelec program, which is headed by Leti, demonstrated that the hybrid
device's performance is comparable to the reference device fabricated with the
current process on 100mm wafers. The fabrication flow is fully planar and
compatible with large-scale integration on silicon-photonic circuits.

"Silicon-photonic technologies are becoming more mature, but
the main limitation of these platforms is the lack of an integrated light
source," said Bertrand Szelag, a co-author of the paper. "This project showed
that a laser can be integrated on a mature silicon-photonic platform with a
modular approach that does not compromise baseline process performances. We
demonstrated that the entire process can be done in a standard CMOS fabrication
line with conventional process and materials, and that it is possible to
integrate all the photonic building blocks at large scale."

The integration required managing a thick silicon film,
typically 500nm thick, for the hybrid laser, and a thinner one, typically
300nm, for the baseline silicon-photonic platform. This required locally
thickening the silicon by adding 200nm of amorphous silicon via a damascene
process, which presents the advantage of leaving a flat surface favorable for
bonding III-V silicon. The laser can be integrated on a mature silicon photonic
platform with a modular approach that does not compromise the baseline process
performance.

The novelty of the approach also included using innovative
laser electrical contacts that do not contain any noble metals, such as gold.
The contacts also prohibit integration lift-off-based processes. Nickel-based
metallization was used with an integration technique similar to a CMOS
transistor technique, in which tungsten plugs connect the device to the routing
metal lines.

Next steps include integrating the laser with active
silicon-photonic devices, e.g. a modulator and photodiode with several
interconnect metal levels in a planarized backend. Finally, III-V die bonding
will replace III-V wafer bonding in order to process lasers on the entire
silicon wafer.