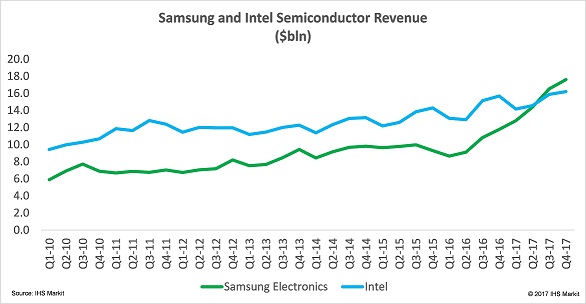 In Q2 2017, Samsung's top-line revenue surpassed Intel's
"” but in pure semiconductor revenue, generated by the sale of its own products,
Intel remained the market leader, a position it's historically held in our
Semiconductor Competitive Landscape CLT Intelligence Service.

Our semiconductor revenue market share calculation
excludes the sale of components to third parties since the third party will be
credited with the component sale into the merchant market. In Q2 2017, we
estimated Intel's semiconductor revenue at $14.6 billion and Samsung's at $14.4
billion. This represented 12 percent quarter-over-quarter and 58 percent
year-over-year growth for Samsung, driven by its memory business growing 15
percent quarter over quarter and 71 percent year over year.

The memory market supply-and-demand issues continue to
favor Samsung, who makes over 80 percent of its revenue from memory integrated
circuits (ICs). In Q3 2017, Samsung grew its revenue from memory by more than
16 percent quarter over quarter and 62 percent year over year. By contrast,
Intel's memory business is a mere 6 percent of its overall revenue and, while
it grew 2 percent quarter over quarter and 37 year over year in Q3 2017, it had
an insignificant impact on overall semiconductor performance.

In Q3 2017, Intel's semiconductor revenue grew 9 percent
quarter over quarter and 5 percent year over year to $15.9 billion. The
performance was good news to Intel investors because it reflected successes in
the company's strategic move away from a declining client computing market and
toward what Intel describes as data driven segments: data center, memory and
Internet of Things (IoT). However, it could not compare to Samsung's 15 percent
quarter-over-quarter and 53 percent year-over-year semiconductor revenue
growth, topping $16.5 billion in Q3 2017. Samsung remained the global memory
market leader and continued work on its long-term strategy "” to provide the
most advanced memory technology.

Our Q4 2017 forecasts take both companies' semiconductor
revenues above the $60-billion mark for 2017. The long-term battle for revenue
supremacy within the semiconductor industry continues as the memory market
reaches an equilibrium in supply and demand, and as new revenue opportunities
in artificial intelligence (AI) and the IoT, including connected devices and
self-driving cars continue to emerge.


Information and insight from IHS Markit on TK semiconductors.