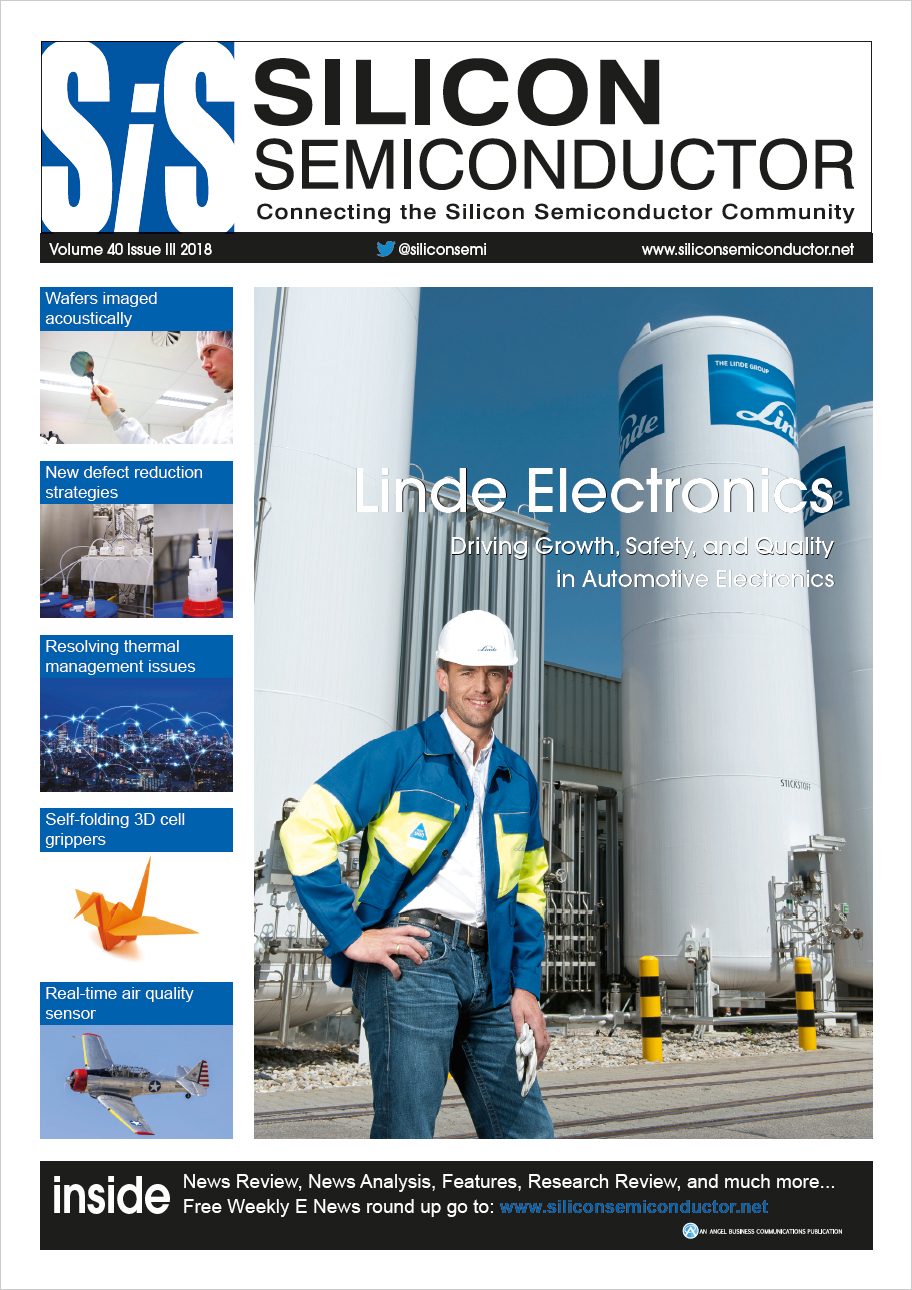 If a wafer can be imaged as though it were flat, devices with defects can be removed after dicing and the warping of individual wafers can be measured. Tom Adams, consultant, Nordson-Sonoscan explains why this is important

A wafer just sawn from an ingot may be found to have one or more internal anomalies, typically voids. As the wafer goes through later processes, it may be found to have anomalies such as warpage or bonding problems. These anomalies can cause losses of various kinds during later processing. Warpage, for example, may cause breakage during dicing, while voids may turn into pinholes during polishing of the wafer, or, if not detected, may turn into various types of eventual field failures.

Silicon, gallium arsenide and other commonly used wafer materials are all good to excellent transmitters of energy in the form of ultrasound. This means that they can be imaged by acoustic micro imaging tools in multiple imaging modes. Acoustic imaging is nondestructive and can locate, image and analyze any internal structural anomaly. Wafer types that have been imaged acoustically include unpolished and fully processed wafers, solar cells (i.e., PERC), MEMs, 3D ICs, Sensors, LEDs, Lab-on-Chip and Chip-on-Wafer applications. The materials involved include silicon, glass, GaAs, sapphire, and combinations of materials.

For purposes of this article wafers are divided into two categories: flat wafers and warped wafers.

Flat wafers, whether blank or patterned, can be imaged in small quantities on a laboratory-style acoustic micro imaging tool from Sonoscan's C-SAM tool line, as is often done for analytical purposes. In production environments, larger quantities are imaged automatically by the AW300 tool. When blank wafers are imaged before polishing or impregnation, the goal is typically to look for anomalies within the wafer itself. After further processing steps, imaging may be looking at the adhesion of a chip to the wafer. The AW300 tool requires an operator only to initiate the imaging sequence, which uses imaging parameters defined by a recipe designed specifically for a given wafer configuration. Imaging follows these steps:

A robotic arm removes two wafers from the wafer carrier and places them on the tool's imaging stages. (A tool may have multiple carriers, robotic arms, stages and transducers.)

The ultrasonic transducer begins scanning. The wafers are scanned simultaneously to increase throughput. As the transducer moves, a jet attached to the transducer maintains a column of water between the transducer and the wafer.
Several thousand times a second, the transducer pulses ultrasound into the wafer and receives the echoes from any material interfaces the pulse strikes. The amplitude of a given echo will determine the color of the pixel at that location in the acoustic image of the wafer.
At the conclusion of scanning, the robotic arm lifts the wafer and places it in the drying area. The imaging data for the lot of wafers being imaged may be stored in the AW300 or sent via SECS/GEM to the user's Factory Information System. In either case, Digital Image Analysis™ software is used to separate wafers into reject and accept.

If the targets of imaging are individual unpolished wafers, the most likely internal anomaly is a void that formed when the ingot was cast. The transducer scans a few millimeters above the top surface of the wafer. A pulse of ultrasound from the transducer will enter the wafer and, if it happens to strike a void, be reflected as an echo back to the transducer a few millionths of a second later. The speed of ultrasound through silicon and other wafer materials is so high that the echo from one pulse is received before the next pulse is launched.

Reflection is caused by the material interface between the silicon of the wafer and the air the void. Ultrasound at these high frequencies does not travel through air, so it does not pass through the void. The difference in physical properties between silicon and air is so great that nearly all the ultrasound is reflected as a very high amplitude echo. The pulse also encounters two other material interfaces, one between the top of the wafer and the water column, and one between the bottom of the wafer and the air beneath it. These interfaces can be excluded from imaging by instructing the transducer to accept for imaging only those echoes originating from the depth of interest. The echoes are said to be gated on that depth.

Figure 1. The transducer accepts echoes only from the gated depth (red). Warping makes much of this depth unreachable

When the automated tool is imaging wafers having two or more layers, the depth of greatest interest is bonding between the layers. Here the gated depth might be only slightly thicker than the bonding material. The bulk of the wafers above and below the bond may be ignored, particularly if they have already been scanned as individual wafers. A few examples of depths imaged: the bond between two SOI wafers, the seal on devices in a MEMS wafer, and adhesion between sapphire layers on an LED wafer. The purpose of imaging is to find anomalies such as voids or delaminations within the bond. If there is a reliable history that shows that anomalies in specific locations or anomalies below a certain size pose no danger to long-term performance, devices with these anomalies may be accepted.

Wafers can become warped in various ways. When the wafer is cut from the ingot, it may experience mechanical stresses that result in warping. Nonuniform heating can also warp a wafer, as can some doping or deposition processes. Wafers of large diameter (300 mm, usually) may be extremely thin. If a wafer is too thin to support its own weight, any number of circumstances can lead to warping.

When chips or other items are bonded to a wafer, the bonding process itself can create mechanical stresses that result in warping. So can significant thermal differences between the wafer and the item being bonded.

One of the problems in the imaging of warped wafers is that the transducer is set to focus on features that lie at a specific depth below the transducer - 0.5 inch, for example. A gate of desired thickness is set at this depth, meaning that only return echo signals whose transit time indicates that they originated at a material interface within that gate are accepted for imaging. Timing starts at the Front Interface Echo - the echo sent back from the interface from the top of the wafer and the water couplant. Echoes from all other depths are ignored. What is measured is the time difference internal interface between the front interface and the internal interface.

On a flat wafer or wafer pair, this system works nicely. But if the wafer is warped, the gated depth will be bouncing in and out of the depth that the transducer is focused on.

The diagram in Figure 1 shows, with some vertical exaggeration for clarity, the cross section through a warped bonded wafer pair. The heavy dark line is the bond between the wafers. The red line marks what would be the optimum focus depth if the wafer were flat. If the scanning transducer blindly follows the gate and accepts echoes (if any) only from that depth, there will be serious differences in the amplitude of signals during a scan.

Figure 2. A warped wafer imaged by a vertically stationary transducer. Green regions are infects, but other regions are not.

Across much of this wafer pair, the transducer will be receiving no echoes because the gate is in the bulk of one of the wafers, and not at the bond. Only here and there does the gate actually encompass the part or all of the thickness of the bond.

The gated depth is usually kept as thin as is feasible to avoid imaging features at multiple depths in the same image. There are a few sample types - high-voltage ceramic capacitors are one - where it is customary to gate on essentially the whole thickness of the sample because its uniform internal structure means that an internal defect such as a delamination is serious at any depth. In a bonded wafer pair, however, the gate is kept thin on the assumption that the wafer will be flat. The wafers above and below the bond are unlikely to have internal features, especially if they have been imaged individually before bonding.

If warping is severe, the biggest risk might not be missing the gate, but that the transducer that is moving at a speed that can exceed 1 m/s a few millimeters above may strike a high spot on the wafer, with likely damage to both items. The largest variation in surface elevation on badly warped 300 mm wafers is about 6 mm.

So how does one successfully scan and image even a modestly warped wafer? Sonoscan noted that the transducer receives thousands of echo signals per second from the sample's top surface. These echoes are not used in imaging internal features, but they can be used to measure the distance from the transducer to the surface thousands of times a second. What Sonoscan developed was Quantitative Dynamic Z (QDZ), a system that constantly reads the altitude of the transducer above the warped wafer's surface and instantly adjusts the transducer's altitude to follow the contours of that surface. Contour following keeps the gated depth constantly in focus during scanning even if the wafer its warped. Since the transducer is instantly adjustable, the gated depth is always the same distance from the transducer, and the acoustic image of a warped wafer will appear to be the image of a flat wafer.

Figure 2 is the C-SAM image of a 300 mm wafer that is seriously warped. Colors show the contours: regions that match the green tones in the color map at left are in within the gated depth and will be imaged properly. A small faint yellowish area at the center of the green region is slightly higher.

The other regions - blue, pink, and at the lower left, white - indicate regions that are progressively lower than the gated depth. These regions will be imaged poorly (no usable data) or will be missed completely.

Figure 3 is the same wafer imaged by the module that uses QDZ to constantly adjust the transducer's elevation to maintain a constant distance from the wafer's undulating surface. The result is that the wafer is imaged as though it were flat, and all regions are imaged within the gated depth - even the small faint greenish-yellow area near the top. Devices having structural defects have been identified and can now be removed after dicing. The warping of individual wafers can also be measured to assess their suitability for stacking. Enabling the transducer to image almost any wafer as though it were physically flat has solved these problems.

Figure 3. The same wafer imaged by the instantly adjustable transducer. All regions are imaged successfully